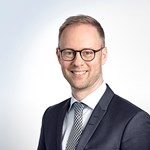 Daniel works with general business law and has key expertise in arbitration and litigation as well as cases involving contractors. He is a member of the Commercial Dispute Resolution group and the Property and Construction groups.