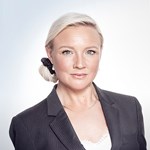 Johanna is a member of the industry practice group in Helsingborg and specializes in the areas power production (including nuclear), power transmission and industrial projects. She assists clients on both sides with contract drafting and contractual negotiations in these areas as well as in seeing major power and industrial projects through to completion. In addition, she has broad experience in corporate law, private and public M&A as well as capital markets.